For the first time in Cornell’s history, students this year can take a class to learn the language of the Cayuga Nation, whose traditional territory is now home to Cornell’s Ithaca campus. The launch of the class coincides with the United Nations Declaration of 2019 as the Year of Indigenous Languages.

Stephen Henhawk, a Cayuga speaker and historian, will teach the hands-on class, which will focus on the relationship of language and culture to plants and growing.

“A lot of our language is connected to nature, so many of the lessons will revolve around the planting cycle,” said Henhawk, adding that the class will visit a traditional Cayuga garden that he has planted at the Cornell Botanic Gardens. The plants there are grown from heirloom seeds his family saved from the Cayuga Lake region.

Central New York is home for the Haudenosaunee, or Iroquois Confederacy, of which the Cayuga Nation is a part. During the American Revolution, military campaigns destroyed major Cayuga villages, forcibly displacing many members of the nation to resettle with other Haudenosaunee Nations or move to Canada. Some Cayuga Nation members remained in the region and others have returned in the past 20-30 years.

“A lot has been written about our culture, but I wanted to give students an account from our own people,” he said. “I feel really deeply connected to this geographic area. This needs to happen here.”

Students in the Cayuga Language and Culture class (AIIS-Ling 3324) will receive basic language instruction, as well as take part in discussions about the Cayuga Nation culture, history and future, Henhawk said. The class will be offered in both the fall and spring semesters.

“I was raised by my grandparents, who were speakers of the Cayuga language, so I was lucky to be immersed in it,” Henhawk said.

Jolene Rickard, director of the American Indian and Indigenous Studies Program and associate professor of art, history of art and visual studies and John Whitman, professor of linguistics, will also co-teach the class.

“We’re not expecting students to become proficient in speaking in one semester, but we do want them to understand the key concepts in the language, which will help ensure they have the correct foundation to understand an indigenous language,” Rickard said. “We’re hoping they might want to take this up and pursue it further.”

The Cayuga language is going through a revitalization, Rickard said, because community leaders realize the need to make sure the language is carried on to the next generation.

“People are deeply invested in maintaining the Haudenosaunee culture,” Rickard said. The Haudenosaunee or Six Nations are made up of the Mohawk, Oneida, Onondaga, Cayuga, Seneca and Tuscarora Nations, whose homelands are located throughout New York and Canada. “I think there’s a generation of young people coming up who have had the benefit of language immersion programs and classes in their communities. They are coming into adulthood with a working conversational vocabulary.”

Henhawk said people in the Cayuga Nation realize the importance of outreach into the community. “A lot of times, we don’t get our due, so this puts us out there and creates an awareness of what’s going on with our people,” he said. 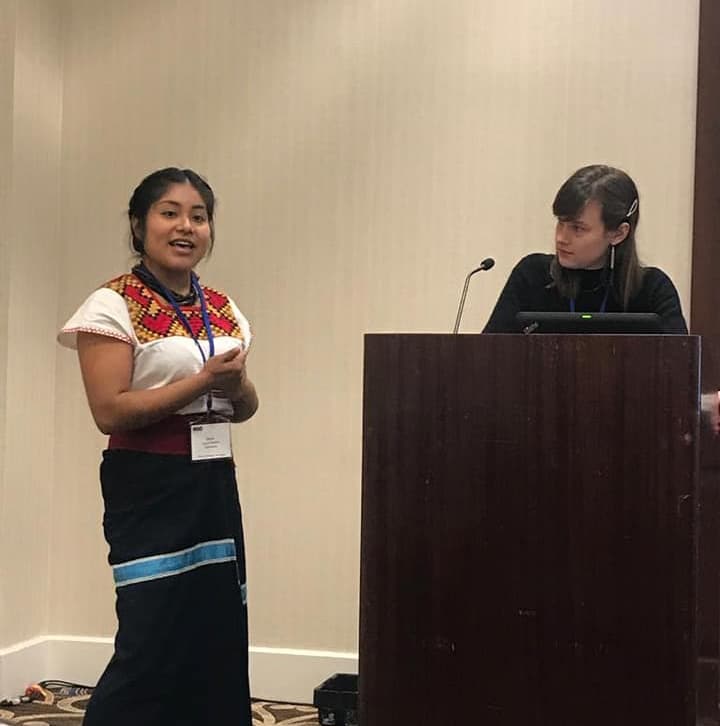