One day during a school break from Cornell his freshman year, Nigel van der Woude ’17 discovered some old boxes in his grandparents’ house. They were filled with letters from his great-grandparents, written in Italian. His grandfather had died when van der Woude was 3, so never really got to know him.

Already a lover of language, van der Woude started teaching himself Italian so that he could read the letters.

“I had this very romantic notion of life in Italy,” he said. “The letters were just people talking about living life, but it was a chance to discover things about my grandfather that I didn’t know. I realized I was a lot like him.”

Van der Woude, a linguistics major and French minor, was recently honored with a Fulbright English Teaching Award and will spend nine months in an Italian high school starting in October.

“Since I was 10, I’ve always been inspired by my language teachers and I want to give that experience to other people,” he said.

He’s fluent in Italian, French, German and English and has taken classes at Cornell in four other languages as well — Egyptian hieroglyphics, Arabic, Hebrew and Serbian.

“My father is from the Netherlands so I grew up hearing a lot of Dutch, then when my older brother started taking French, I would steal his textbooks and try to learn a bit,” van der Woude said.

He has already spent three summers in Europe, first as a high school student living with a family in Germany, then as part of the Cornell in Rome program and last summer studying English teaching methods at the University of Edinburgh in Scotland.

Although he doesn’t have a specific assignment yet, van der Woude expects to be in a high school in southern Italy.

“My family and friends are excited because now they have an excuse to go to Italy,” he said, adding that he still has lots of family there from his mom’s side.

After the year in Italy, van der Woude can see several possible pathways – going into diplomacy, writing fiction or teaching. His dream job? Being the U.S. ambassador to Italy ranks right up there. 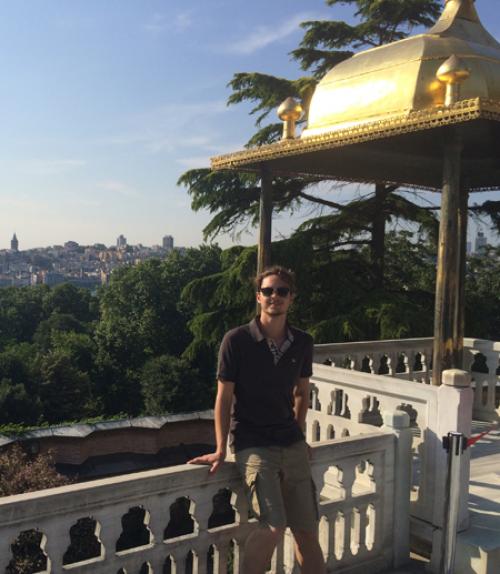